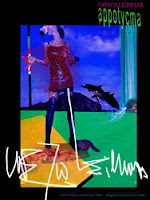 ............... *appotycma* 1 - What is your definition of "Toxytt visualism"?I envisioned a project which I have been intensely working on for years.Over that spanning time different themes have been recorded floating one into the other.Let me outline one of them: It is about moral neglected individuals.I met and spent considerable time with.I saw their fear clicking anger and aggression. I saw their eyes and the darkness they express.It is a testimony of contemporary issues such as violence,obsession,sex dealing with the beauty and struggle of every day life.I tried in an unsentimental way to explore the psychology of these people from racially,ethnically and nationally diverse backgrounds coming from the lower rungs of the economic ladder .The urban landscape is often rough, sometimes devastated in the wake of a hurricane or fire. Clusting together the hustle individuals experience and devastating surroundings defines *Toxytt visualism*.
2 - Where do you get your inspiration?From the street.The street never sleeps and is very demanding.
Although it boils down to location.Manhattan is more a bizarre hit-and-run situation than an area where people commute like Long Island.The sleepless nights of thousands enthusiasts hitting the streets for instance in Miami Beach spending the time in over 100 nightclubs and other events melting their conjunction with harassment, crime together with the poverty of misfortune people,
squatting and sleeping on the streets with intimidation and non empathy ,this peculiar mix between isolation and excitement calls not for pitying glances but makes even the most fearless person frighten .Working in this environment over years as I did for "TOXYTT" is a commitment resulting in my statement as a reality novel.
3 - Do you feel that you express your subconscious through your works?My subconsciousness is the contrast between reality nightmare and acid theater.The connection of both is spiritual .This is very important to me. The spirituality is not religious,not new age,nor any other alternative beliefs.The sacred lies in relating real concern with the endurance sphere of life .
4 - You work mainly in the United States. What are the typical American ingredients that allow you to perform your work? In what is your art inherent in the U.S.?There are no typical ingredients since the human beings I work with are neither objects nor subjects.The suffering is not restricted to a local territory.It is everywhere. There is nothing characteristic to the USA.There is no box to put my work into.This is not how it can be seen.My work is more multidimensional.
5- What does *appotycma* mean ? What is "the alchemy of Cheyco Leidmann"?
*appotycma* is the close acronym of Apollonius of Tycma.The story of mysticism.I saw a link to the many new images presented in this exhibition. Using my eyes as weapon and borderline as target.
6 - Some elements often appear in your work, as birds(in *appotycma*) what do they represent?The kind of elements in my images are sometimes ambivalent, symbolic, but not symptomatic. They should contribute to understanding by triggering off instinctive reflexes.A pure definition of objects does not exist.The ones I use often constitute a hidden drama .I visualize the reality for questions and doubts in another context and open spaces .
7-With *appotycma*, a new representation appear than can be considered as a "still life", showing women faces and waste, that are more abstract than the other compositions. Is it a successful realization of your work? What's the message? In your entire work, you put on stage the woman body. You handle it, you ill-treat it.What consideration do you have for your female part?This is a misconception. I articulate in an ultra realistic manner, scripted and directed, a radical feminist style not calling for pretty. I deduct perversion out of the deep psyche,eliminate meaningless details and manifeste the abyss as normal. The women protagonists are emotionally,psychologically expressing their coded reactions in their own personality. I try staging the abstract theater of time with my sense of freedom.This is successful then,when I shape my mission into attention.
8 - You live between United States and Paris. How does Paris influence your work?I am rather a cosmopolitan person,an outcast nomade.I live on a harsh alien planet like in a foreign country.Everyday life is the tracker for my inner inspiration and influence,triggered by roots which reach back to Picasso's three-eyed women,Dali's melting watches,Dr.Caligaris Cabinet,Ken Russel's the devils. The 24 hour life, the multicultural vibration and the unique and intense concentration of art in Paris is shaping.
9- You consider yourself as a "visual artist". Where is the border between visual artist and photographer?I do not categorize myself. However photography plays an important role as a optical tool in my visual universe.But not the only one. Crossing traditionally pictorial boundaries into other media fill my mind.My career traversed diverse genres such as film, screenplay writing, performance,and the madness of marketing.There is no border between work of art if it sustains a statement of the image. Caroline Gautron, journalist, Paris
Contributions Ypsitylla von Nazareth
Posted by yvn at 12:27 PM
Labels: 05-Interviews english
Newer Post Older Post Home