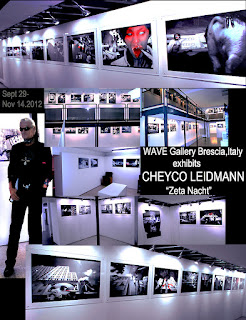 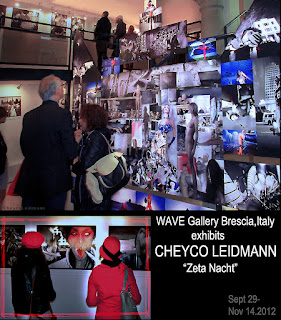 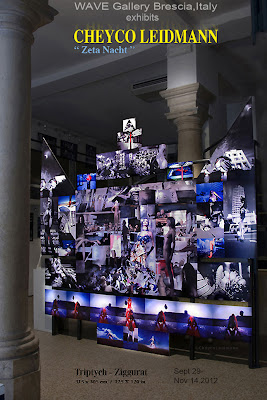 Zeta Nacht
*Every breath, every step takes us to the dance of the golden calf; every breath, every step takes us toward the last night of the earth. *The false gods of materialism rise in the altars of the believers. Built on the colorful excesses of the 80s, the lure of the powerful illusions, delusions, Cheyco Leidmann seduces the virtueless, the believers to follow him as he strolls down the long nave toward the altarpiece, a triptych so full of lies and secrets, it shouts the truth for all to see. *Dance around the golden calf; worship and then slay your idols. The dead live on the shoulders of Brueghal, of Grunewald, dance with Nolde, stand in the high heels of the flamboyant Catherine de Medici. *Dance with the vapid sirens and mannequins who mean no harm; and yet they do harm as they, too, are sacrificed on the altar. Curls of barbed wire slither in and out of the garden among the models, the icons, the idols.
*Clear out the temple, clear the dance floor for the final dance of the zeta nacht. Blinded by arrows through the eyes, see what is within.
*Kneel penitents, kneel and pray to the suspended truths of greed and beauty before you dance off into the night with the golden calf while the militant apes guard the altar.
*Every breathe, every step takes us toward the last night of the earth. And the shadow of the earth eclipses the moon, as the shadows of the insensate rule the hordes.
*In destruction lies creation.        *Kill your idols. 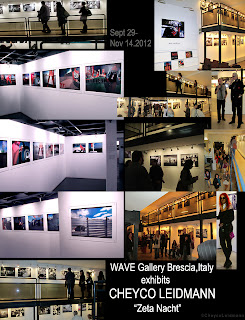 Casting a light back onto the shadows showing up details in a visualized twilight theater about the struggle between reality and madness,the paradox of irony and illusion,confronted with the fact that we are "living at the edge of madness" this is 'Zeta Nacht'! The new black and red conceptual images by Cheyco Leidmann, never shown before and presented by the wave gallery, are glutted in their monochrome tones,on palettes of a piercing eroticism, they participate with all their heat to any kind of apocalyptic vision. Authentic,real and unrestrainedly brutal-though at first sight the brutality appears to remain concealed behind an aesthetic contemplation.The bodies enjoy and bleed at the same time.Screams of pleasure open fester wounds.The abyss of perversion is only revealed upon closer scrutiny.The beholder is equally captured in the image as are the morbid,seemingly mad figures in their fantasies.These fantasies are only unraveled slowly,by means of the lighting guiding the viewer through the picture and revealing gradually the fundamental aspects to him. Empty houses,windows without glass,reflect the desperateness,the finality of the situation.Faces without eyes,beetles and religious symbols with a depth of eroticism turn the image into a memento mori of our time. Some images create a mural-like,imposing complex composition confronting issues critical to contemporary urbanism.Flux and reflux capture the world in a state of chaos.The event manifests an encounter between two views.One demonstrating Cheyco Leidmann's commitment to this new interpretation of neo-visualism,including a specific triptych constellation composed of multiple images and the other showing his hard-core color classics.It is a dialogue of true substance which should inspire the viewers eyes,thoughts and emotions seeing the truth of the picture , which by then is no longer just in black and white.Creative collaborator Ypsitylla von Nazareth accompanies Cheyco Leidmann.
Posted by yvn at 1:45 PM
Labels: 01-Exhibitions
Newer Post Older Post Home